Event trace data is collected from trace providers, which are components of the operating system or of individual applications that report actions or events. Output from multiple trace providers can be combined into a trace session.

Configuration information is collected from key values in the Windows registry. Windows Performance Monitor can record the value of a registry key at a specified time or interval as part of a log file.

Click on the Performance Monitor under Monitoring tools. This will show the current performance counter data in a graph format. 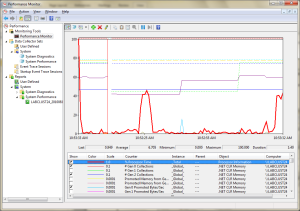 We can add more counters to the set by right clicking and selecting Add Counters. 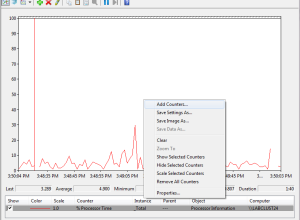 Select the system, which you want to observe. Here, I selected my local system to check the status. Select a group from the available performance counters groups. For example,  I want to know about the performance of ReportServer database, so selected the SQL Server: Database -> ReportServer. 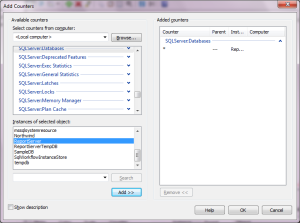 We can add any number of counters using this Add Counter window. All added counters will appear in your Monitor and show the current status.

In next article, we will see how we can record the performance data for a long time and analyze it latter.